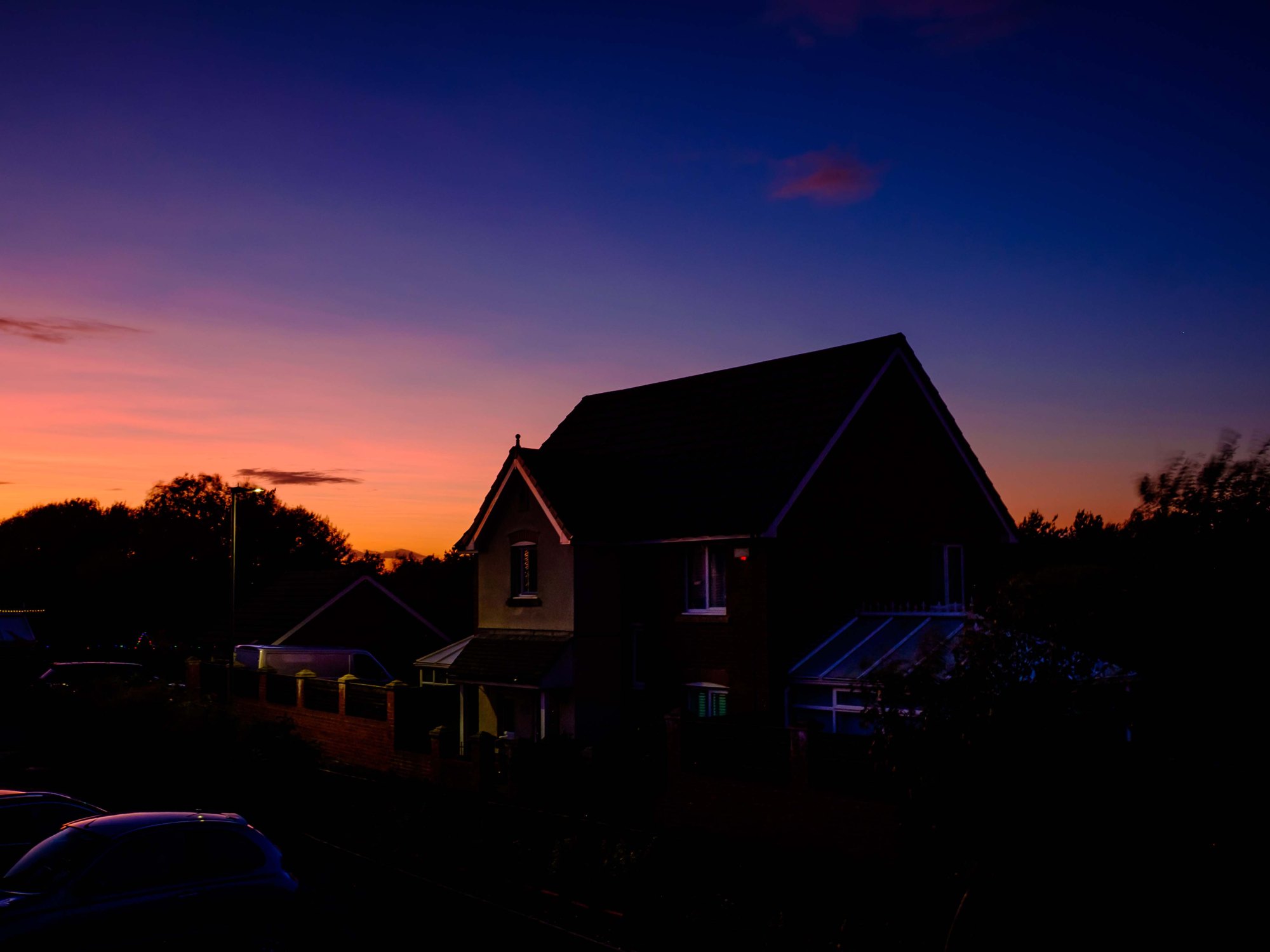 I’m having a change for Monday, and as I’m not sure what I’ll post, it’s going to be of a miscellaneous nature.

I spotted a wonderfully coloured sky one evening last week and hung out of the bedroom window to capture it as best I could.

also had a shot at the moon, though it’s not one of my best (had a couple of wine’s prior and that’s never good for focussing!).

and this from a few weeks ago

No doubt I’ll have another go at some point.

Am just starting a long series of books by Sven Hassel, set in WW2. Sven is a Danish chap who ends up in a German penal battalion after first being incarcerated in a prison camp. It’s about a German platoon (Porta, Tiny, Old Man, the Legionnaire, Heide, Barcelona-Blom, Sven,etc.) on different fronts during WWII and narrates the atrocity and absurdity of war, not to mention the brutality and stupidity of the nazi regime.  The characters are just brilliant and whilst the theme of course is dark, there’s so much humour in the books.  I read a few many years ago, but now want to do them all, I may be some time! After those I’ll be re-doing Donald Jack’s The Bandy Papers, about a WW1 aircraft pilot, funny as anything but also full of pathos.  6 volumes but my are they expensive on eBay! Have managed to find the first 2 at a reasonable price, but some of them are going for £20-£60!!  I read them as a teenager, they were my Dad’s books (he was in the airforce) but don’t know what happened to them, sadly.  And expensively!

I’ve seen 2 films lately, the first was the classic and epic 1977 movie, A Bridge Too Far.  As we’ll be visiting Arnhem next week Phil thought it would be a good idea for me to see it. What a brilliant film it was too. I loved the overblown way the Americans were portrayed, full of smarts and derring-do, and loved even more our overblown stiff British upper lip portrayal.  The part on Arnhem Bridge where a German soldier comes to ask for the brits surrender is just hilarious, and that the British officer has his black umbrella with him at all times was class.  Absolutely sterling stuff! Everyone and his dog was in it, Dirk Bogarde, Anthony Hopkins, Ryan O’Neil, Sean Connery, James Can, Elliot Gould, Robert Redford, the list goes on and on.  I can’t believe anyone reading this hasn’t seen it, but just incase, it’s about the WW2 Market Garden Operation, where basically we made a total balls up of the objectives which were to capture and hold some bridges crossing the Rhine. Especially Arnhem. I’ll be taking photo’s of it next week as it’s still there.

The 2nd film I saw was Trainspotting 2.  Phil really wanted to watch the 1st again before we saw it, but we don’t have a copy of it, and though it’s in sky store, we resent having to cough up even more when we already pay for Sky movies. (Sheisters.)  Anyway the movie was OK, and showed what had become of the lads after 20 years, but you couldn’t watch it really without having seen the first movie. I liked it well enough, but it didn’t have the same impact as the first which I suppose is true of the majority of sequels, and gritty realism isn’t my thing overmuch anyway. It had a few laughs along the way which was it’s saving grace, and the original cast Ewan McGregor, Ewen Bremner, Jonny Lee Miller and Robert Carlyle, all did a cracking job with the acting, but the plot to me was a bit meh.

SO that’s the first Monday Miscellany over and done with,